Have you seen the Arctic Fire Fox?

Silence. You can almost hear how the arctic fox swings its tail on the fells. Darkness. Only the glowing trails of fox’s gallop in the cloudless night sky.

The arctic fox with fire in its tail is a mythical animal in Finnish folklore. This magical fox lives far in the forest. Every hunter’s secret dream was to meet this mysterious arctic fire fox. Whoever managed to capture the coy fox was to become rich and famous.

In polar areas, people are familiar with the phenomenon. All the nations have their own stories of how the intriguing dance of lights is born. In Finnish Lapland, the common name used for northern lights is “Fox’s fire”.

Single show of northern lights is hard to predict. Observing the activity of the Sun and the magnetic field of the Earth, it is possible to assess expectancy but the most secure information you get when looking to the cloudless sky around midnight.

The electric particles causing the northern lights burst from the Sun with high speed and meet the upper layers of atmosphere usually in polar areas because of the magnetic field. Activity of the Sun affects more to the yearly appearance of the northern lights in the southern areas but in Lapland, northern lights are quite frequent every year.

Northern lights occur throughout the year but slightly more in autumn and spring, than during winter and summer. Summer nights are, of course, too light to see the delicate glow of auroras.

The most typical time to spot northern lights is couple of hours around midnight. During great solar storms, auroras can dance from twilight to dawn.

Weather does not affect the probability of northern lights but because the phenomenon occurs in higher atmosphere, they cannot be seen if there are clouds.

When the circumstances for seeing the northern lights are most suitable, the nights are clear and usually quite cold in Finland. As the aurora hunt demands patient waiting, it is advised to dress up warmly from head to toe.

Give your eyes time to adjust to the darkness. Achieving the best night vision can take tens of minutes. If you need to use light, the dim red light will not reduce the adaptation of eyes.

The ability of human eye to separate colours in the dark is quite weak, so the northern lights will appear dimmer in the nature than in the photos. 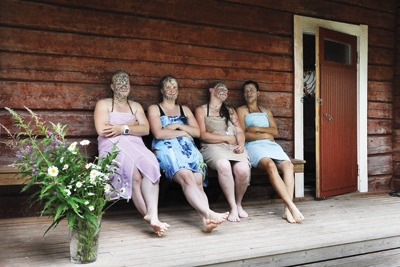