Many names for snow

There are many different words for snow in Finnish language. Depending on temperature and speed of wind, snow can be very wet, fluffy or packed. In Finnish, wet snow is called nuoska, fluffy snow höttö and packed snow ajolumi. The one that sticks to branches and different surfaces is called kuura.

The exact amount of words is hard to tell as different dialects have also their own expressions in addition to the commonly known ones. Snow itself is ice crystals that are formed in clouds. Shape of individual ice crystal varies depending on humidity. Dry air produces simple forms and moist air may cause complex star-shapes. When the crystal has gotten large enough, it starts it journey to ground. Snowflakes evolve from joined crystals. When snowflakes are big, they can called rätti. Also different types of snow fall have different words. Blizzard is called tuisku or pyry, and sleet is called räntäsade.

When it is time for snow crust, hanki, many dig out their skis and head to the hard surface. When the crust is really hard, you do not even need snowshoes for moving aroud. Viti, white snow, makes the landscape look silent and clean, and it makes crunching sound under the feet. When the snow is really fluffy and soft, it is a great exercise just to walk in it. Nuoska, wet snow, inspires to sculpt and form snowman, snow horses and snow castles. When it is really cold, pakkaslumi, reflects moonlight like there would me millions of diamonds on the ground. What a great photos you can get then.

Different forms of snow bring their own possibilities and specialties. Also the folk stories, and local experiences about snow are interesting to hear. 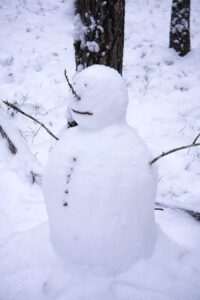